A life in sound

As my body thrilled to the vibration of voices chanting during my yoga class, it struck me that sound is my life!

I always loved experimenting with noises, stories, reading aloud. I was probably one of the only people at school who waited excitedly to be asked to read from a play or a book, most dreaded it! Telling stories into my cassette machine (yes, we're talking prehistoric times here) & learning to snort like a pig & trill like a frog. I do a reasonable horse too!

I remember my physics teacher silencing the whole class, just by pouring water from a jug into a bowl. The sound was mesmerising. If you ever have a hoard of noisy youths in your charge, give it a try! Choirs, plays, running around the corridors at university wearing masks & exploring bizarre & slightly scary characters, chanting during meditation classes, a radio project with the visually impaired, inspired by Peter White. Who knew I'd work with him only  a year later?! The first job of my career in the industry as a BBC Studio Manger, or Sound Engineer.

I even met my husband through sound. I was called into the studio where he was working, to help out with some sound effects for Fungus the Bogeyman. Did you know, you can create an image for the listener of Fungus on a bike, by turning a bicycle wheel whilst squishing a hot water bottle filled with flour & water to make a farting sound? Well, you can! You can chop someone's head off by slicing through a cabbage too. Radio drama can be wonderful - the best can sound positively filmic and whisk you off to places most radio can't.

When I went on to work in television as an announcer, transmitting TV programmes, trails, idents, vision mixing and directing news programmes and so on, I learnt a few new tricks. When cutting from one source to the next, we would always start by leading with sound.  Why? It tricks your brain into thinking that you've seen the pictures too and makes the whole thing sound smoother. Clever, huh?!

Silence is golden, but it's powerful too, you have to know when to use it and for how long. It demands a certain level of bravery to experiment with silence in this industry, but it can really make an impact. Which is more scary - shouting or slow, whispered words. Recite a nursery rhyme quietly and slowly to yourself and you'll have your answer. Put it in a minor key & you'll even scare yourself! Equally, a thriller without sound is far less scary. The art of the dubbing mixer is often overlooked.

The skill of the voice over isn't all in the speaking, there's actually lot of listening involved. To directions, to the pace and tone of the script, to the pauses, to imagining how the audience will hear what you're saying. Will that note, pace, style deliver the script in such a way that it fulfils its potential? I may feel as though I'm projecting my serious newsreader voice, but if the client isn't feeling it, I need to work out why. This actually happened when I was working with clients down the line in Sweden. I went from my serious voice, to newsreader voice, to my major obituary voice, but still it wasn't serious enough for them! In the end, we managed to work out that it was the intonation on one particular word that needed tweaking for the ears of Swedes. Fascinating!

Mindfulness meditations based around listening to the sounds around you can be wonderful. Just tune in and out to what you hear. No need to dwell or think about it, just listen and notice (ah, that word again!)

Many large brands opt for famous voices for their advertising campaigns and it can work well. But it can also backfire. How many times have you watched or listened to an advert and had no idea what it's for, because you're too busy trying to work out to whom that voice belongs?!

Posie the Westie, full time voice over assistant extraordinaire, is over-sensitive to sound. She can hear the window cleaner's ladder miles away & be frantic for hours! She is not a fan of ladders, trailers, or anything else that clangs, never mind wheelie bins, car doors banging, a pin dropping on the other side of the world, the list goes on! It must be exhausting for her, poor dog!

I shall leave you with this thought & wish you a week filled with beautiful sounds... 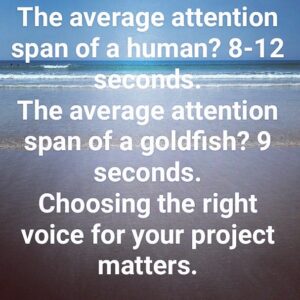 
SARA IS REPRESENTED BY

You can find out more about which cookies we are using or switch them off in settings.

This website uses cookies so that we can provide you with the best user experience possible. Cookie information is stored in your browser and performs functions such as recognising you when you return to our website and helping our team to understand which sections of the website you find most interesting and useful.

Strictly Necessary Cookie should be enabled at all times so that we can save your preferences for cookie settings.

If you disable this cookie, we will not be able to save your preferences. This means that every time you visit this website you will need to enable or disable cookies again.